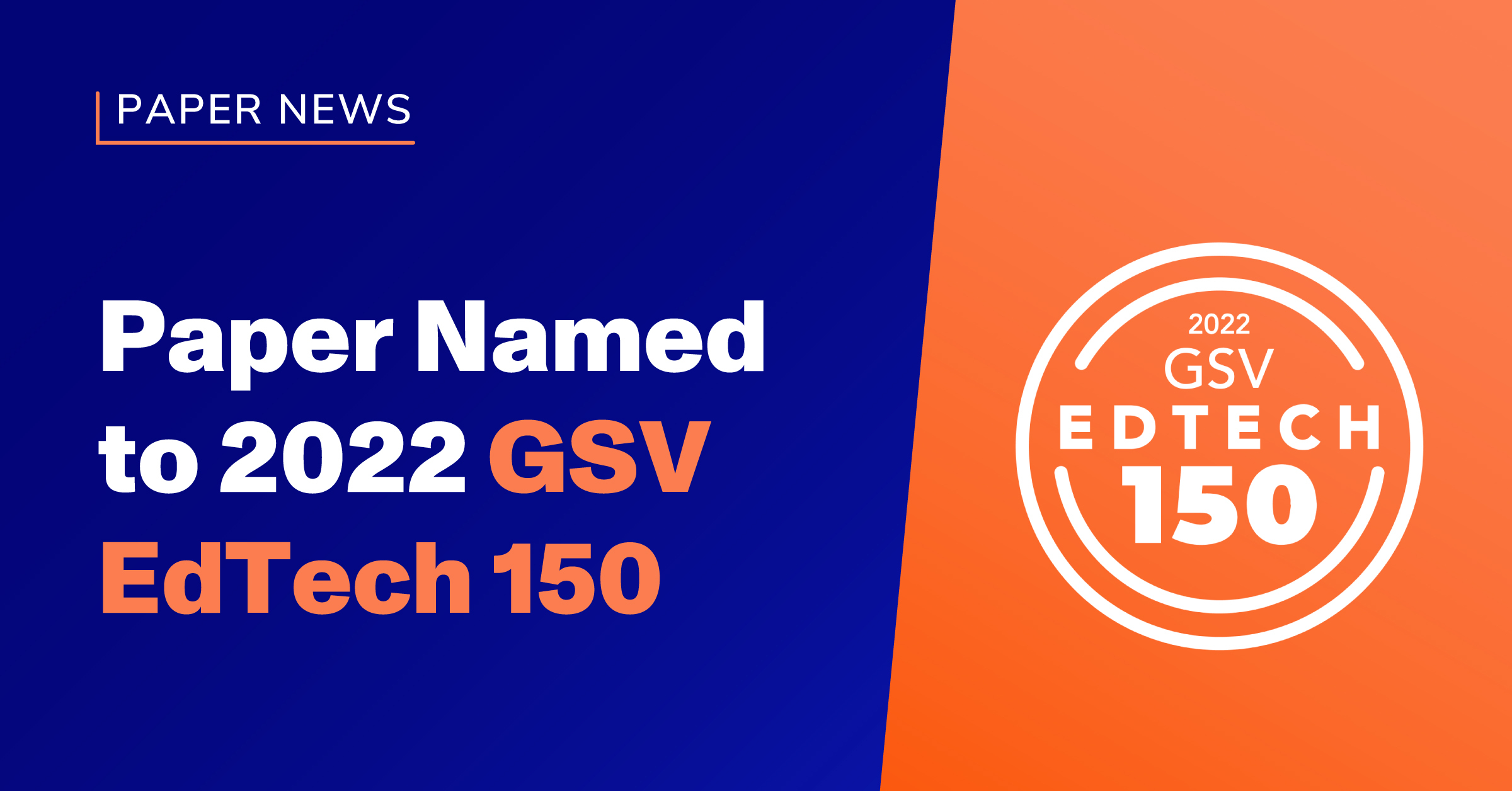 Paper is proud to be included in the 2022 GSV EdTech 150, a list recognizing the world’s most transformative growth companies in digital learning curated by female-led, multi-stage venture capital firm GSV Ventures

Paper was chosen from over 3,000 venture capital and private equity-backed private companies revolutionizing the world of education technology. GSV estimates that together these 150 companies reach roughly 3 billion people — almost half of the global population — and generate approximately $20 billion in revenue.

GSV launched the list of education technology leaders in 2020 with the EdTech 50. Due to rapid growth in the sector, necessitated by a global pandemic and continued remarkable technological evolutions, the list increased to 150 in 2021. In 2022, the sector shows no signs of slowing down with the 150 companies selected for this year’s list collectively experiencing revenue growth in the high double digits.

Learn more about the GSV EdTech 150 and the selection process here.

"We’re honored to receive this recognition from GSV for the second year in a row," said Paper CEO and Co-founder Phil Cutler. "At Paper, we're committed to empowering all students to achieve success with equitable access to academic support. We're working district by district, state by state to make this mission a reality, and we thank GSV for recognizing our hard work."

“Today, we announce the annual GSV EdTech 150," said Luben Pampoulov, Partner at GSV Ventures. "As the global pandemic continues to drive learners online, more and more companies are innovating in the digital learning space — making it increasingly competitive for companies to make the top 150. We evaluated over 3,000 companies globally this year. The way GSV sees it, Ed is on The Edge, and increasingly more companies have the ideas, know-how, and talent to transform the world and provide all people equal access to the future. We know these companies are well-equipped to help us achieve that goal, and we look forward to watching them do so.”

To arrive at its listing, GSV evaluated more than 3,000 venture capital and private equity-backed private for-profit companies that met the following criteria:

North America — specifically the United States — is the most represented region accounting for 56% of the GSV EdTech 150. 11% of the GSV EdTech 150 hail from India, whose market is experiencing explosive growth with five EdTech unicorns that include BYJU’s, Eruditus, Unacademy, Upgrad, and Vedantu. Europe, Africa, and the Middle East represent 17% of the listing, with several high-quality, fast-growing companies such as OpenClassrooms, Multiverse, and Photomath. Asia, Australia, and New Zealand account for 11% of the list, while China experienced a significant decline in representation due to increased government regulation. Latin America represents 5% of the list and shows strong growth trends, with companies like Hotmart, Descomplica, and UOL EdTech leading the way.