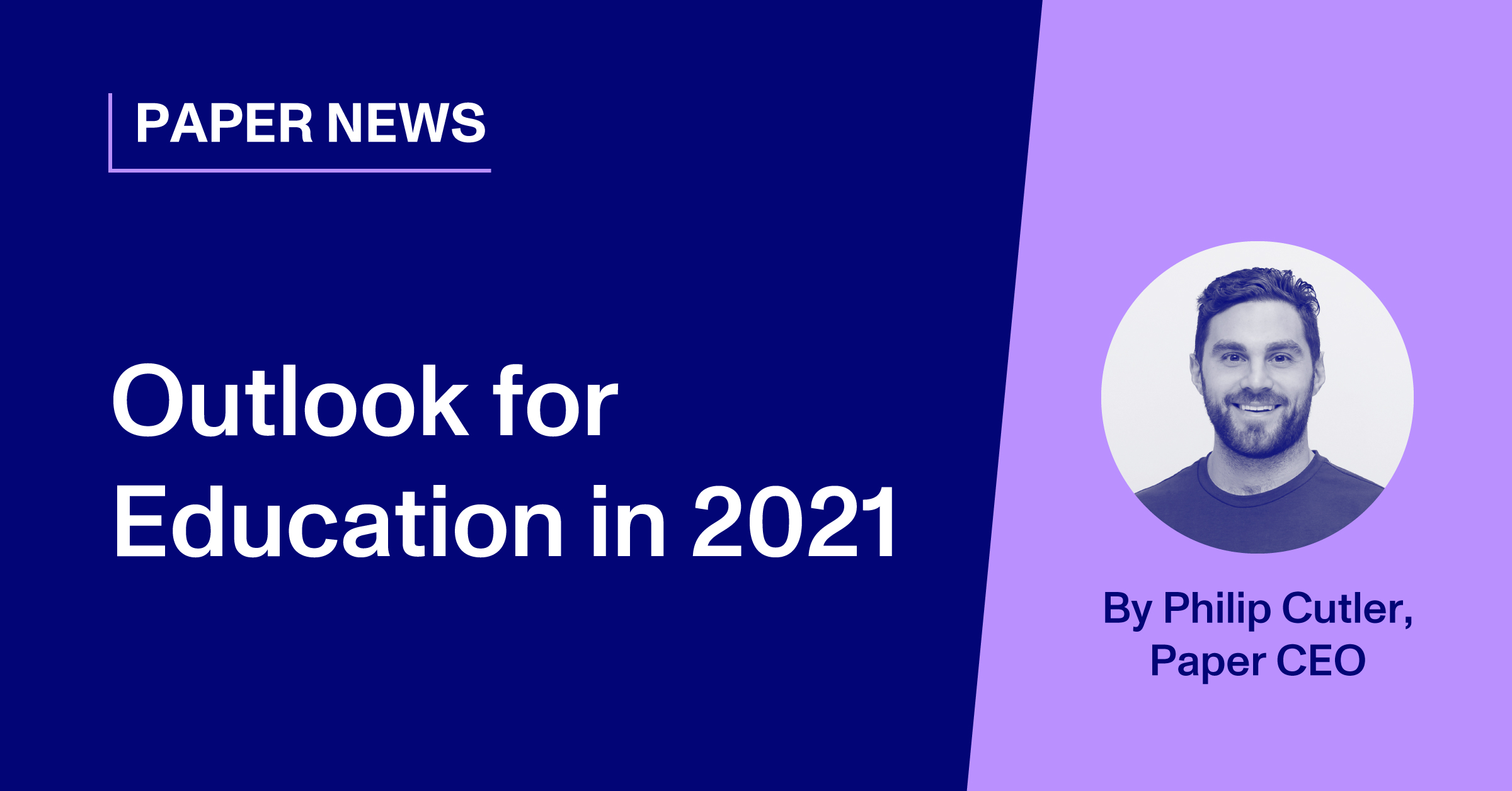 6 Transformative Trends for Education in 2021

As challenging as this time has been, it's hard not to be inspired by all the possibilities to come in 2021. Since March, we have witnessed a seismic transformation of our education system—a transformation that shows no signs of slowing down.

The changes occurring in 2020 were going to happen anyway, though it would have taken decades. But now, they're happening at a much more rapid pace than we had anticipated.

The funds from the CARES Act were primarily spent on resources that helped bring schools up to where they needed to be. The billions that were invested have ultimately allowed K-12 to embrace innovation for good. After all, it's not like students will be asked to return their Chromebooks when school buildings reopen.

So, how does that play into the trends for next year? Innovations are going to come in way faster than we thought, and everything that was on its way out is going to go out a whole lot faster.

1. Every decision can be made through the lens of equity

2. Socioemotional supports for both students and teachers

3. Students have more flexibility and options for their education

4. Standardized tests are on their way out

6. Your conviction in what you're doing is being put to the test

1. Every decision can be made through the lens of equity

The injection of billions of dollars into the education system—predominantly to support the hardware and network infrastructure needed for distance learning and to help students learn outside of the classroom effectively—will be the catalyst for an equitable digital transformation. When you think about the ESSER Funding and the CARES Act, this funding served as a bridge for the districts that didn't already have these investments in place.

Federal, state, and local education authorities can now make decisions under the assumption that all students have access to devices and connectivity. If they don't have both, they need them ASAP.

From an equity standpoint, that's a crucial piece going forward. Prior to this, if you made a decision assuming that people have devices, that would over-index for wealthy families. That's no longer the case. Now, school districts can make decisions assuming that kids have devices and internet connectivity at home. Just think about how once people started having electricity at home, leaders could take that as a given when making decisions.

2. Socio-emotional supports for both students and teachers

Another thing that I think is going to be even more critical in 2021 is support for the emotional and mental health of both students and teachers. The drastic change in lifestyle, which up until school closures was predicated on in-person interactions and relationships, has demanded extremely difficult adjustments from students and teachers.

Many teachers actually make the decision to go into this field because of their love for the in-person interaction component. Without students and teachers seeing each other every day, there's obviously going to be a mental health toll.

Students and teachers have had to learn new technologies rapidly and manage the impacts of the pandemic on their families and households—all while being distanced from their peers and support systems.

Things are going to remain difficult for the next little while for them, so I anticipate there being a lot more focus on the socioemotional piece of what's going on and how we can support them.

Have a look at Breathe for Change and the great work they are doing in classrooms.

3. Students having more flexibility and options for their education

Districts are essentially going to change their business model and manage their budgets to open up more opportunities and ultimately provide a better learning experience for more students.

Instead of a complete upheaval of our existing system, 2021 will bring about more options to our public education menu.

Based on student and community needs, within a district, you may have entirely virtual schools, some that are hybrid, and some that are traditional brick-and-mortar.

4. Standardized tests are on their way out

Back in May 2020, I wrote about how the UC system dropped the SAT and ACT, which was a massive win for educational equity.

Standardized tests are inherently inequitable and antiquated. This has become clearer as several influential educators have taken the pandemic as an opportunity to reinvent aspects of our system that no longer make sense.

We can use data in such a better way than just trying to fit everyone in the same box and determine whether students are good enough to go to a school based on how they did on a standardized test.

Since I was a student, I haven't understood it; I didn't understand it as a teacher; I still don't understand it. This idea of a high-stakes test that determines your future based on multiple-choice questions... We're better than that.

The glacial pace of innovation in schools is well documented. It has been difficult for ed tech companies to grow into the transformative billion-dollar brands that other industries have because the market has resisted change.

Many ed tech companies have had small exits over the years because they end up selling to legacy players. With growth that was too slow, because the industry wasn't evolving fast enough, they were forced to settle instead of shooting for the moon. Established legacy education companies were able to buy them up and integrate them into their offering.

This has been a driver of education's slow growth. Textbook publishers and big curriculum names wanted to keep change at a minimum in order to protect their market. If the education landscape changes quickly, big, established companies are going to be in trouble.

Ed tech companies will be able to bypass that slow growth thanks to the billions of dollars injected into education and the digital transformation of schools. This unlocks a new opportunity for breakout companies to emerge.

One of the biggest things that I've seen is that districts are comfortable moving away from legacy providers. All of our new partner districts have said that they need to solve this equity issue and support all their students. Legacy companies didn't have anything prepared for such a rapid shift, so it opened the door for companies like Paper to take a huge step up.

Riipen (higher ed) and Ellevation (K-12) are some of the other ed tech companies I'm most excited about watching in 2021.

6. Your conviction in what you're doing is being put to the test

One thing that is true, and transcends just the education standpoint, is that your conviction in what you're doing was really tested this year. This applies to all of us: teachers in their classroom, superintendents in their district, and business leaders as well.

If you don't believe in what it is that you're trying to achieve, then you're the first one to check out when things go bad.

It's the idea of the captain going down with the ship—if you're the captain, you're the last person who's on there trying to fix everything. Well, if the captain is not really that bought-in to what is being done, then the captain's on the first lifeboat out saying to everyone, "this is your problem to fix, I'm out." And we saw that in a profound way this year, where a lot of people in leadership positions just checked out.

Everywhere, businesses and organizations that are adapting to current challenges are driven by a love for what they do. For instance, the NBA and the NHL were able to finish their seasons by saying, "look, we're going to put everyone in a bubble, and that's going to suck, but if everybody follows the rules, we can play the game that we love." With this unshakeable commitment to what they do, they were able to get the season done, and the audience appreciated it for it.

There are proxies for these examples in education—districts that have faced this crisis head-on, saying, "We're not going to panic." This is not at all what any of us signed up for, but our kids and their well-being are number one.

Over the past year, we've invested a significant amount of resources into helping our schools reimagine a K-12 system that is more aligned to the needs of all the students and communities it serves.

In an effort to keep up with these systemic changes, the Paper team spoke to nearly 100 leading educators about their experiences and ideas for a better future for K-12. They are compiled alongside research and recommendations in our new ebook: The K-12 Guide to 2021: 10 Things That Should Stay or Go.

Special thanks to Dr. Susan Enfield, Cassie Parham, Dr. Jesus Jara, Dr. Ryan Smith, Natasha Mascarenhas, Steve Kupfer, and Matt Rhoads for sharing their thoughts on the education landscape in the preparation of this article. 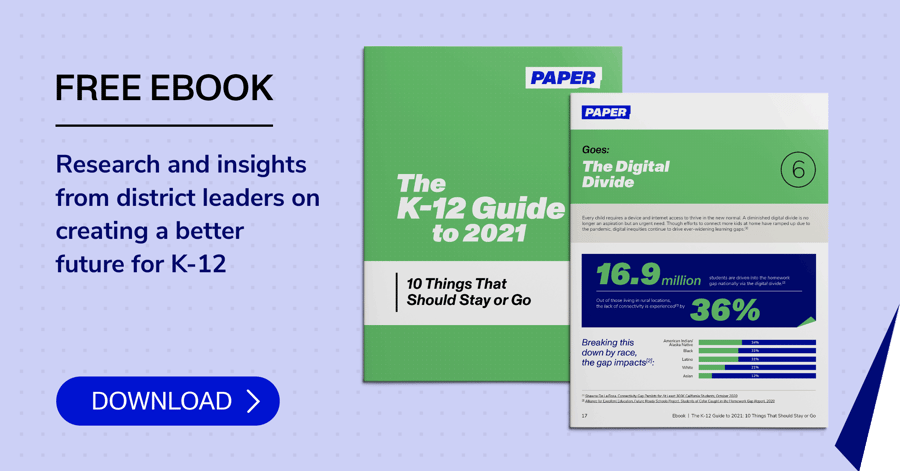