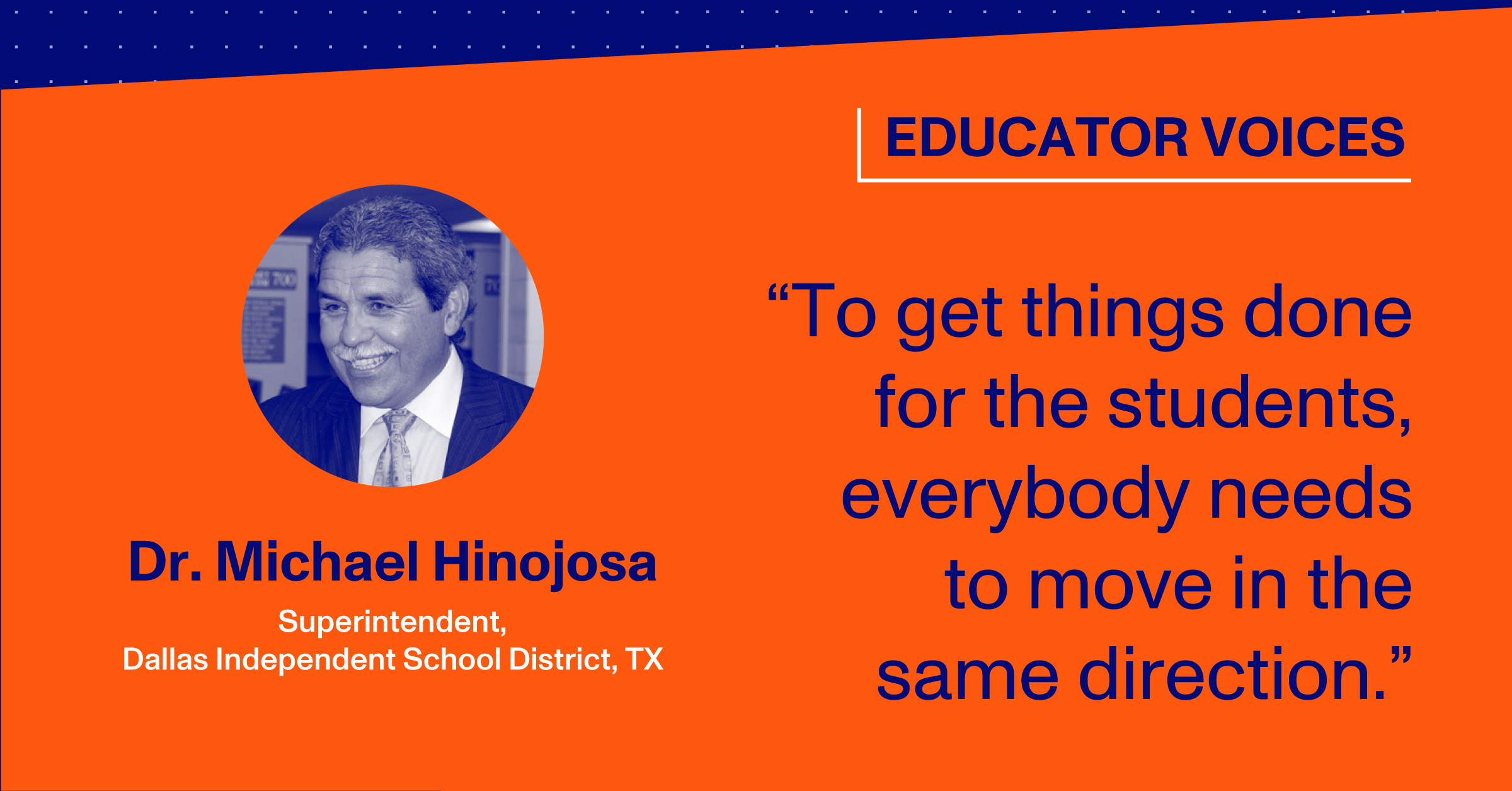 The Secret Sauce of Being a Superintendent, According to Dallas ISD's Dr. Michael Hinojosa

As the COVID-19 pandemic shakes up education, Dallas ISD Superintendent Dr. Michael Hinojosa is seizing the opportunity to tackle the broader issue of connectivity, particularly for vulnerable and disadvantaged students and families.

“We were very fortunate because we had gotten most of a long-range technology plan funded in the last bond election in 2015, and part of that master plan was to have devices for every student,” explained Dr. Hinojosa.

However, as many districts have come to realize, devices are just the first piece of the puzzle.

After strategizing how to secure and deliver devices to all students, the next mission was connectivity.

“We had 36,000 households that did not have broadband connectivity, So although a lot of our devices had a lot of great stuff on them, a lot of curriculum, they did not have connections to the internet that were very reliable. Our board gave us permission to buy $2M worth of hotspots. That’s when I had the epiphany that we needed to start operation connectivity.”

Dr. Hinojosa explained that his focus on connectivity was informed by long-range thinking:

The issue of connectivity quickly became a widely-supported community concern. Dr. Hinojosa intuited a long time ago that this is a problem. He brought up a seminar he attended as a young superintendent:

“I went to a seminar at the Harvard Business School, and I read this article from John Kotter about why transformations fail. A lot of people have tried transformational activities, but they fail because they don’t have a broad-based enough coalition to help get it done.”

Hinojosa reached out to the Dallas business community, other educational entities, including higher education and non-profit organizations.

“I found out that the federal reserve and one of our collective impact agencies in Dallas called Commit Dallas was also working on this problem. We have resources in Dallas, and we have a very healthy reserve and another bond election we’re planning for 2020, so I figured right away, we could all go in on this together.”

Hinojosa described the process of collecting constituents and stakeholders as “organic” as the movement built momentum, incorporating the health community, the workforce commission, and eventually the State.

I challenged the State and said ‘Ok, we’re going on a journey, do you want to join us?’

The governor appointed the Commissioner of the State and I to be the co-chair of the statewide initiative. Meanwhile, I had been talking to the Council of Great City Schools and the American Association of School Administrators, and they joined this journey.”

Hinojosa is hoping to capitalize on federal money earmarked for pandemic-related support.

“There’s $1.5B in the HEROES Act for connectivity and devices, but there’s also a [proposed] $5B for families [in rural areas] to connect to broadband. I’m hoping the Senate will wake up, and the Whitehouse will wake up and get that passed.”

Incorporating virtual learning into the future of education

Conveniently, actions taken as a result of the pandemic fit within the district’s pre-existing plan to design a school in collaboration with Apple.

“We’d been working for a year and a half or two years with Apple on starting an innovative school, so this pandemic accelerated our request,” explained Hinojosa. “Last month, we [requested] a waiver from the State for seat-time because in Texas, if your butt’s not in the seat, you don’t get money for it. We need a waiver for that requirement to look at an innovative school where maybe two days a week are [in-class], and maybe three days a week are virtual learning.”

Hinojosa explained that even if students and teachers go back to in-class learning, building the infrastructure for continued virtual learning prepares schools for subsequent waves of the virus.

Hinojosa envisions a future that incorporates elements of both the old ways of teaching and the new ways learned through distance education.

It’s part of the tale of two cities. You see the very prosperous city of Dallas, and then we’re the blood and guts of the city because our parents are the ones that work in the hotels and restaurants and the hourly jobs. There is going to be great pressure. Those people can’t work from home. They’ve got to be out doing the hard labor.

Laws that forbid leaving a child under 12 home alone are also part of the push to get kids back in school once parents are back to work. However, Hinojosa said one possibility is that older students may continue to learn from home while younger ones go back.

The district is still waiting to be advised on how social distancing in the school setting will look. Still, Hinojosa believes it will involve things like masks, limiting the number of students in the classroom, and plastic shields set up to allow kids to eat lunch in the cafeteria together.

Baked into the strategy of sending students back is an equitable approach that prioritizes the district’s most vulnerable students.

Hinojosa explained that special education students are the first priority with the “medically fragile” coming first. The next priority are struggling students.

We’re going to prioritize students who are the furthest behind and who haven’t had as much contact with teachers to bring them in physically. That’s nothing but equity there. The ones with the greatest need get the most support.

Hinojosa stressed how important it is that at the heart of every effort and decision made is the well-being and success of the students.