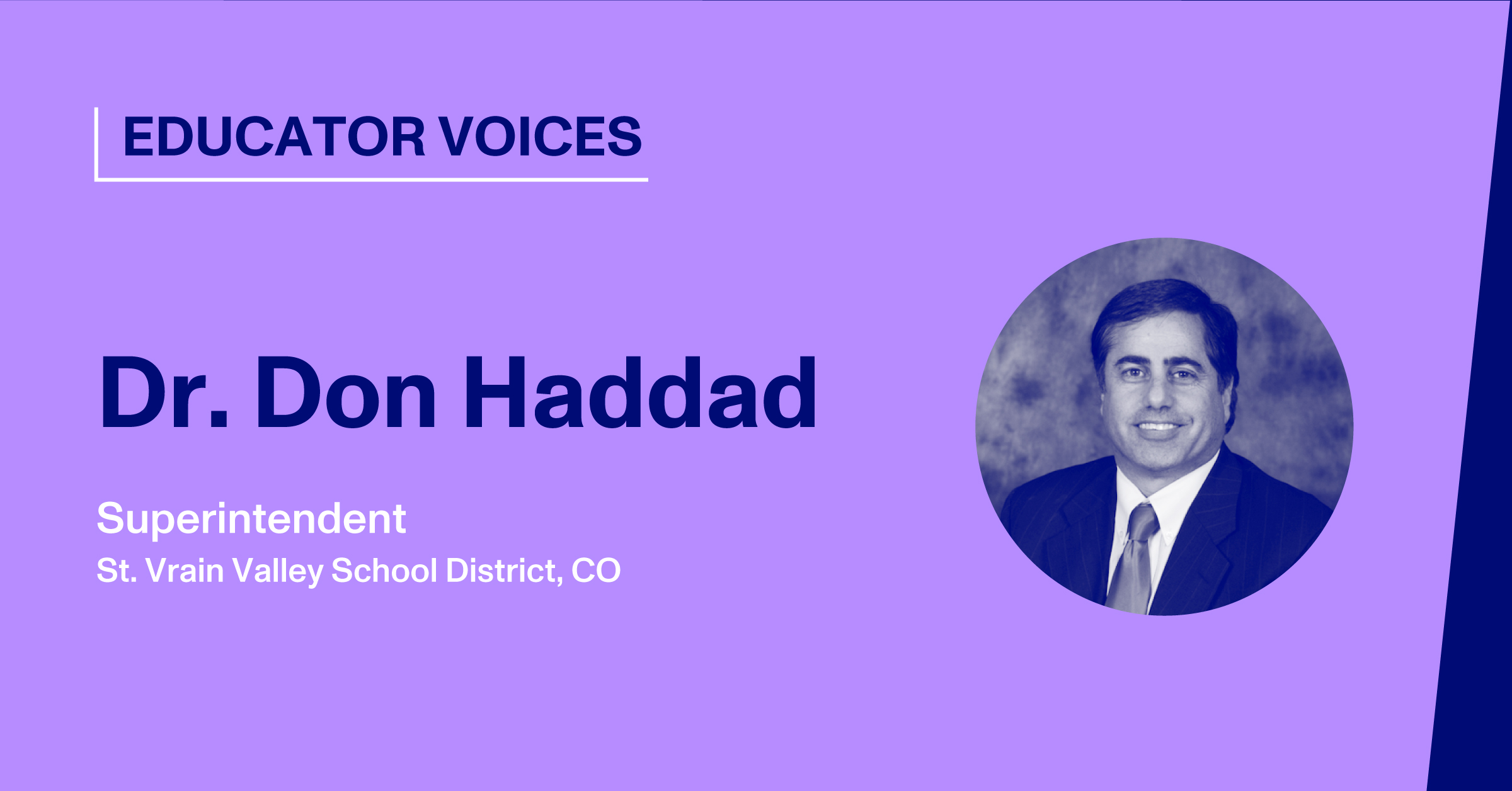 They Started a STEM Revolution—2020 Was a Curveball.

About 35 miles north of Denver, 2013 National Association of School Superintendents’ Superintendent of the Year Dr. Don Haddad and his team have spent the last eleven years  building schools of the future.

St. Vrain Valley Schools have gained widespread recognition, largely due to their “STEM revolution,” in which the leadership began innovating its educational design based on community and technology sector partnerships and input.

“When we set out to do this in 2009, we had a large community gathering called ‘St. Vrain 2020,’ a play on the words 20/20 vision. We talked about the year 2020, and where we wanted to be as a school system then. And fortunately I've been in this role long enough to see it happen,” said Superintendent Dr. Don Haddad.

Since 2009, SVVS has implemented a district-wide 1:1 program, STEM studies that start as early as pre-K, a P-TECH (Pathways Through Technology) program, curricula centred on problem solving and critical thinking, and a “design thinking” mindset.. The team has also cultivated over 95 private business and corporate partnerships with companies such as IBM, Apple, and Toyota, affording the district a state-of-the-art mobile lab and an innovation centre that exposes students to virtual and augmented reality, robotics, aviation, 3D printing, laser cutting, 360 video production, audio editing, graphic design and more.

Listening to Superintendent Dr. Don Haddad, it was striking how his team intuited early on, that innovation was the only way forward in public education:

“We saw a real shift in the global environment around 2008. And we thought at that time it would be really appropriate and strategic to begin putting everything in place so that when our students graduate, they not only graduate with a diploma, but with a strong competitive advantage on a global scale. That was the main impetus."

We knew that this is what our students would need. Because the world was changing so fast. And if you think about Moore's Law, of how the speed and capability of our computers doubles every 24 months, you really can't survive on antiquated systems where you’re just updating textbooks every 7 years.

SVVS’s leadership, technology department and academic programs have won the district awards and acclaim throughout the country and beyond, including the ISTE (International Society for Technology in Education), The Learning Counsel, the 2013 Race to the Top Federal Grant for 16.8 million dollars, and the Investing In Innovation Grant (i3) for 3.6 million dollars. All of these investments and achievements have culminated into SVVS being able to respond effectively to the COVID-19 pandemic. In other words, SVVS’s infrastructure was able to brave the pandemic while continuing to advance student achievement and success.

“You need to have the right infrastructure in order to respond to something like this,” Dr. Haddad said, “And we were fortunate to have that in place.” Since they first began transforming their schools, they had the appropriate devices, bandwidth, professional development, and communication systems needed to move the district online. Dr. Haddad also credited the incredible  work of teachers, students and parents.

Two other critical components for SVVS have been the expertise of its leadership team, and its sturdy financial standing: “Our whole team has been together for years, and they all have an average of thirty years of experience. Leaning on them, being guided by them, and making decisions in concert with them is something that I’ve done all along, and I did the same thing here. And we have really, really strong finances. We have a lot of money in reserves.” Don described how his local community has consistently supported SVVS, allowing it to make great investments and acquire resources to respond to crises quickly. He added, “now having said that, when you move 33,000 kids overnight from coming in every day to working at home, I would not be honest if I didn't say there's a significant challenge there, for sure, but everything was in place for us to to execute on that challenge in a pretty good way.”

Incidentally, for SVVS, being prepared for the coronavirus pandemic was a lucky byproduct of their main mission: Preparing their students to excel in technology-rich environments.

Even when you don't have the coronavirus to manage, you’ve got to do that. Because most workplaces are going to be heavily involved with technology as well. Our role as educators is to prepare them for the workforce; to help them understand that the workforce is global. It's not your four walls anymore, it's the four corners of the world. And the only way you can really access that is technology.

Dr. Haddad described how the district has over 170 robotics teams, pre-K through 12, that compete at the local, state, national and global level. One of their corporate partnerships with IBM is called ‘Innovation Academy’, where SVVS elementary students spend weeks with engineers from IBM to work on solutions for a smarter planet. “We've built our Innovation out quite a bit, and we start it with them when they’re young. And, I'll tell you by the time they’re in middle school they're doing work that  used to be done as 11th and 12th graders,” he said.

“And, it didn't mean that we moved away from foundational learning; traditional math, sciences, social studies, language arts, etc. We do all of that and we built this system that we refer to as ‘FoundationInnovation.’ So you have a strong foundation of the necessary content and subject matter, and then on top of that you layer it with robust innovation. The key is to do both, build that strong foundation, and then powerful innovation.”

Dr. Haddad reckons that this particular health crisis has brought about the realization that leaders must embrace future-facing changes in order to stay relevant. It's taken SVVS over a decade to get to where they are, and other districts were trying to get there overnight when closures had to be announced. “I don't think it's something you can do overnight effectively, but I also don't think there’s a choice,” he stated.

“I think sometimes people figure they've got time, and that maybe the next generation of leadership will come into the district and they'll move things forward."

SVVS already has all its summer programs set up, ranging from academics, athletics to performing arts. They’ve conducted training on social distancing guidelines and will be doing a hybrid of virtual and in-person programming throughout the summer. They’ve also been making plans for postponed in-person graduation ceremonies and virtual awards nights. As for the fall semester, Don said “It's just a moving target. So what we're doing is planning for all scenarios. And, we've got Plan A and Plan B for the fall based on whether we're able to congregate with a large group or not.”

As it’s a district that is known to think ten years ahead, the Paper team felt obligated to ask Don about 2030. And Dr. Haddad didn’t have to think long for a response: “We’ve got thirty-three thousand students right now, and our build-out plan is for eighty thousand students; more students, and more teachers, and more education. I'm really excited about the growth and the development in our community from a high-tech standpoint, but also from a rigorous academic education standpoint too.”

Despite the impressive abundance of innovative tools and programs at his district, Don emphasised that they are just a means to an end. Technology in SVVS exists in service of its people: “Once you get that fly wheel moving, all of the hard work and the smart work is done by the teachers, staff, and students. You become a cheerleader for them, and with great pride, you tout all the incredible work they're doing,” said Don.

“Elected officials, media outlets, businesses, economic development councils, parents and everybody else in our community have rallied around public education,” explained Dr. Haddad. He beamed as he described the “high levels of energy” around him, even amidst the current challenges. “Oftentimes, the conversations in education are a constant barrage of what we can't do. But in our community, it's a constant barrage of what we can do, and what is possible that has been amazing to watch.”