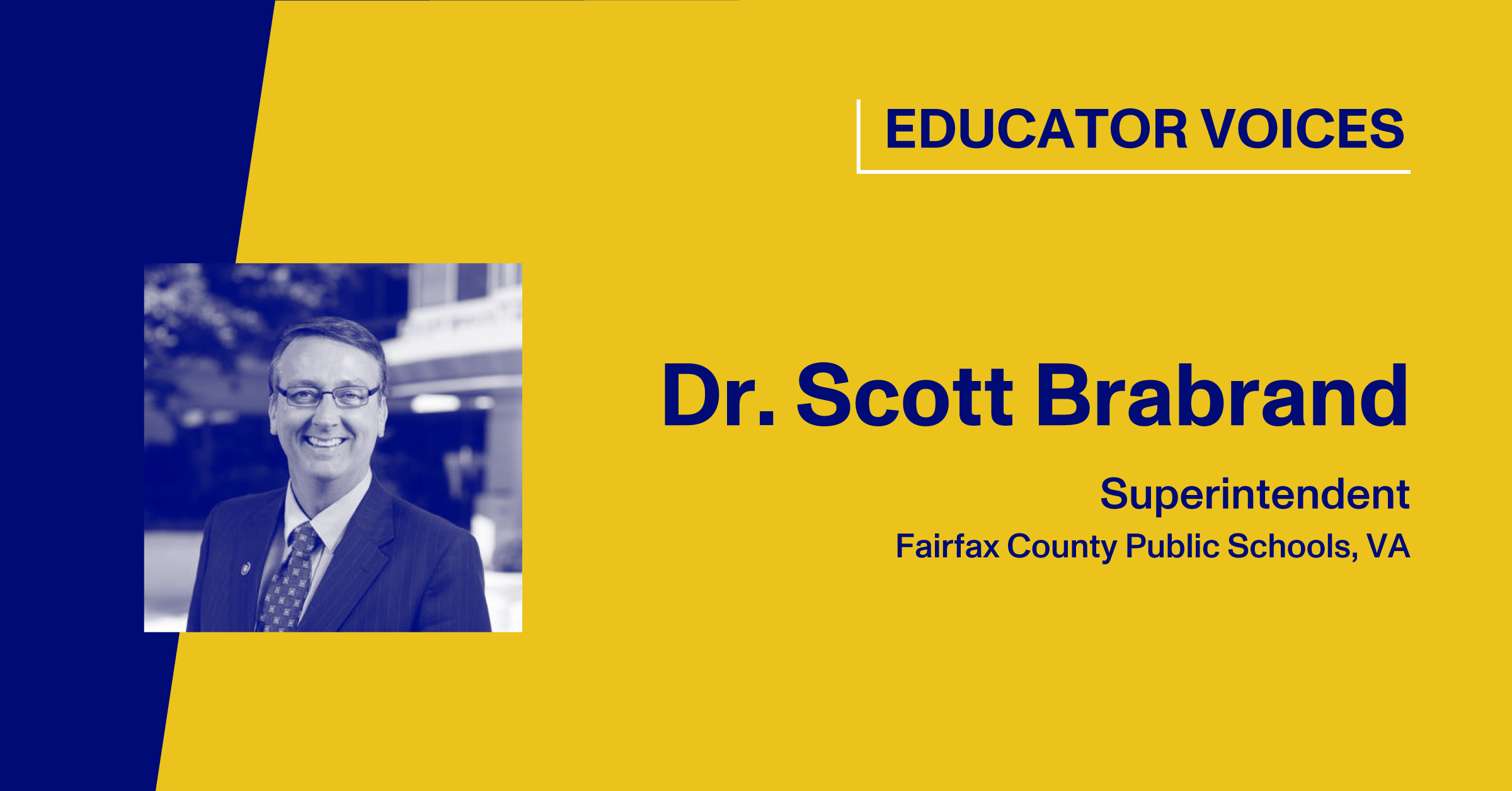 “We just finished a great week of both asynchronous and synchronous learning,” said Dr. Scott Brabrand, Superintendent of Fairfax County Public Schools, when we spoke to him on Friday, April 1st. He was excited to share with the Paper team that his district had 300,000 attendees on Tuesday, and over 200,000 on Wednesday and Thursday.

For the 10th largest district in the country, this was no small feat. The massive district had a rocky start to its pandemic response plan; the leadership had mere days to figure out how to move 24,000 staff members and 189,000 students online. Making such large-scale institutional changes proved difficult; the district faced backlash for repeated technology issues as they implemented synchronous (face-to-face) online learning in their plan. “There was real frustration deservedly,” said Dr. Brabrand, “there were some glitches that we had to re-look at and address. There are always a lot of lessons learned when you fall short of what you’re trying to do.”

Scott explained that though asynchronous learning had its place in distance learning to provide flexibility, the leadership felt that for keeping relationships sustained and nourished, elements of synchronous learning were also needed. After experiencing a steep learning curve in incorporating this, the district is finding their foothold:

So many more of our kids are back online in a face-to-face format, and we’re glad to see that happening because the relationship piece is what really helps our kids and our staff right now during these challenging times.

Since they first began distance learning, the leadership at Fairfax County Public Schools has spent considerable time reflecting on and learning from their initial struggles. Superintendent Scott generously shared the key lessons from his district’s experience.

Scott spoke with humility and optimism about his district’s distance learning trajectory. The Paper team was touched as we heard the leader speak about how he will be using these lessons to inform his district’s future decisions. Our conversation with him was a poignant reminder of how tough these times are, and how important it is to extend grace to one another as we get through this.

Communicating and collaborating in a crisis

Scott explained that a big takeaway for his team was the reminder of how it is crucial to over-communicate in a crisis and to make communications as clear and concise as possible.

Scott mentioned that the messengers should be the people closest to those receiving the communication. Teachers and principals are often better suited because they have a better understanding of their school community’s specific needs. “A lot of the communications in the last four weeks came from my office,” said Scott, “but then the follow-up could have been better delivered I think through principals and teachers instead of it all coming from the central office.”

In this time of increased collaboration between district leaders, Scott believes that there is an opportunity for districts to move from a competitive mindset of “who’s the best school district” or “who has the best reputation” to a collaborative mindset. “We’re all in this together, we’re facing the same exact issue, and we need to coordinate our responses through a similar lens of focus on kids and staff, their education and their safety,” stated Dr. Brabrand.

Will all students have to physically come to school next fall? This question remains unresolved, but the fact of the matter is the decision will be informed by the needs and the level of the child. This will also look different in a high school than it would in an elementary school, and Scott contends that the most vulnerable students who have the greatest needs will require the most traditional face-to-face instruction.

Though distance learning can accomplish a lot and people can make virtual connections, Scott claims that they’re still never going to be a replacement for in-person instruction, especially for the kids that need it the most. And when they eventually return to school, what will matter most is considering every child’s unique experience:

We want to find out where their learning gaps are, but how do we first recognize the humanity and the trauma of what they’ve been through? We know every kid and every family is going to be in a different place. So we say, ‘Every child by name and by need.’ We’re going to be tested on that principle more than we’ve ever been [...] Some are going to be much less impacted than others, and the impact is going to be beyond just one school year.

Scott observed that there is a sense that COVID-19 may unleash greater freedom for teachers to innovate than they’ve had in almost a generation. Though the accreditation system they’ve had in place has created a “testing culture,” the experience at Fairfax County Public Schools for the past few weeks showed that: “People weren’t eager to have a test again. They wanted to see a teacher again. They wanted a social-emotional connection to humanity.” Now is the time to let teachers lead the change and to reinvent teaching with a laser focus on the humanity of the student, rather than their test scores.

Our interview concluded with Dr. Brabrand emphasizing that: “Fairfax County Public Schools is an amazing district and when there’s frustration, underneath frustration is hope and love, and there is a lot of love for the school system and the students and staff in it.” His admiration for his community manifested as he commended everyone for their efforts in getting through this difficult time. He especially applauded teachers for going above and beyond and being the “first responders for our children,” while having their own lives and routines disrupted from the effects of the pandemic.

As Fairfax County Public Schools celebrate the strides they’ve made in distance learning, in moving forward, Scott believes that we must provide one another with grace in this time; “the more we do that, the more we’re going to be able to get better and get through this together.”