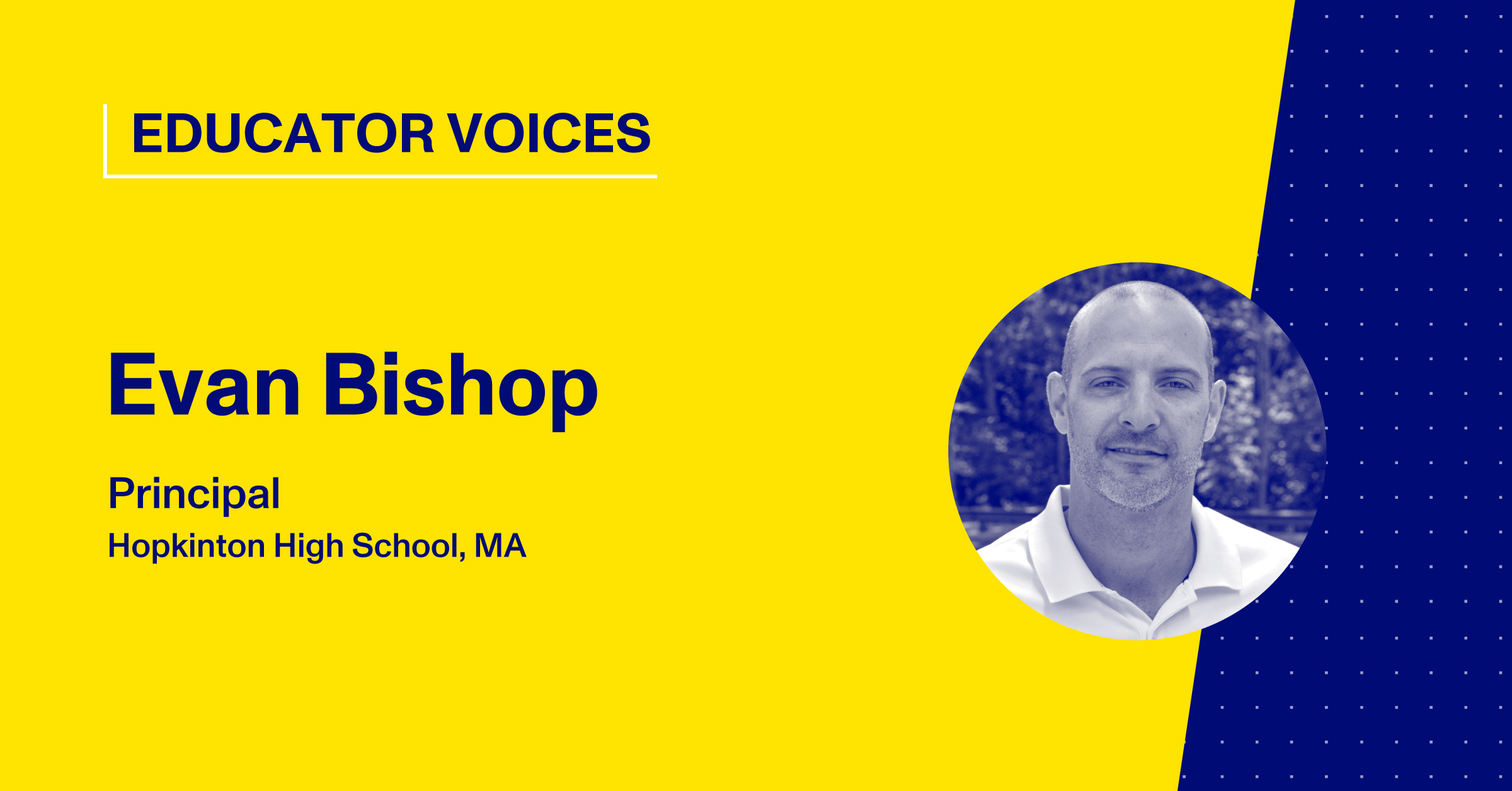 Snapshots From One of Massachusetts’ Top-Achieving Schools

Evan Bishop is in his seventh year as Principal of Hopkinton High School, one of Massachusetts’ highest-achieving schools. Since the onset of building closures, Evan’s team has done their best to maintain their school pride, annual traditions, as well as an incredible 80-100% student engagement rate in distance learning.

Hopkinton High School has impressively navigated the waters of 2020. And their North Star? Maintaining community well-being. “Even though we have established ourselves as a high achieving school, the focus has still been on the socioemotional wellbeing of our students and staff,” Principal Bishop explains.

During the two-week adjustment period when schools closed, a period of panic Evan referred to as Remote Learning 1.0, after school closures in March, there was no new instruction for students during online classes. In April, they began Remote Learning 2.0, which for him marked the beginning of teachers introducing new class material and concepts, setting more expectations for students’ online participation .“It’s still panic, just different kind of panic each time,” he joked.

Bishop participates in Zoom calls with other principals at his district to debrief on progress and strategies, including reduced daily lesson hours (i.e. 9 am -12:15 pm) and dedicated extra help days on Fridays. These new protocols have become commonplace across various schools. Bishop explains that he is seeing very little of students simply logging on to “show up for a 45-minute Zoom class,” because “it’s just not going to work in this environment.” Instead, administrators put in extra hours to develop a blend between synchronous and asynchronous models for learning.

As Bishop says, “There is no playbook for this,” so he is working to emphasize the importance of “having patience, humor, and flexibility” above all.

What’s in a grade?

After much deliberation, Hopkinton decided to go with a pass/fail model for grading in its second semester of this school year. This was done primarily to accommodate students and families facing disproportionate distress and learning disruption at home due to the crisis; it would put certain students at a disadvantage if letter grades continued to be given out. Although this decision presented relief for some parents, there was also a fair amount of concern from others, especially regarding college admissions. Evan described his leadership as being caught between two camps of parents: ones saying “there’s not enough work,” and others saying “there’s too much work” before they made the decision. Luckily, as colleges increasingly announced leniencies in the admissions processes with respect to grades next year, educators at Hopkinton were able to focus on embracing new measures of learning and success for their students, emphasizing to concerned parents that it is not about the grades during a crisis, although it is about the learning. For example, teachers were encouraged to provide detailed and descriptive feedback to students as opposed to their usual letter grades under the newly imposed pass/fail model.

As many schools are now saying, “schools have closed, but education continues.” Hopkinton’s impressive science program has been unaffected by this virtual move, as students recently participated and excelled in the virtual Massachusetts science fair. Robotics students worked to develop shields that have been sent around the country, a shield team of about 350 members.

Students also participated in a virtual talent show of over 25 acts, and the Class of 2020 was honored with a celebratory car parade. Bishop says that there will be some form of an in-person graduation this August, but the school is unsure what it will look like.

On the final day of each school year, seniors have traditionally attended a Senior Transition Day—a day of workshops about everything from money management to changing a flat tire, to mental health tips from Principal Bishop, an Alumni panel about the college experience. The day is typically topped off by a screening of a senior farewell video from the staff. This year, the Hopkinton team adapted this milestone for the distance learning reality. They did webinars for each of the workshops they would usually offer and stuck to the tradition of the senior farewell video, which consisted of a series of heartwarming and funny TikToks from the staff.

Professional development and community building for Hopkinton’s staff have been adapted to fit digital mediums as well. There have been Zoom trivia nights for faculty, and their usual staff summer retreat will now be taking a virtual form. Hopkinton developed a task force of senior teachers who were sharing their successes over a collaborative Google Doc. Interested teachers could then sit in on other teachers’ Zoom sessions to witness the methods by which these successes were implemented. Every week there are also sessions for staff that anyone in the district could join, which offered training led by the district’s technology department.

The focus is now shifting to the fall. Over the summer, Hopkinton has redistributed the attention of about a dozen teachers (that only teach senior students, whose classes had since ended), to work with the department heads on assessing what went right and wrong during Remote Learning 1.0 & 2.0, and planning for the technological and curriculum needs of the school going forward.

“Most educators will tell you that we’re working harder now than we ever have, albeit we’re in sweatpants all day,” said Principal Bishop, “and I would say the same for our team. I’ve been here 15 years, and it’s in moments like these when you’re reminded what a special place this is.”