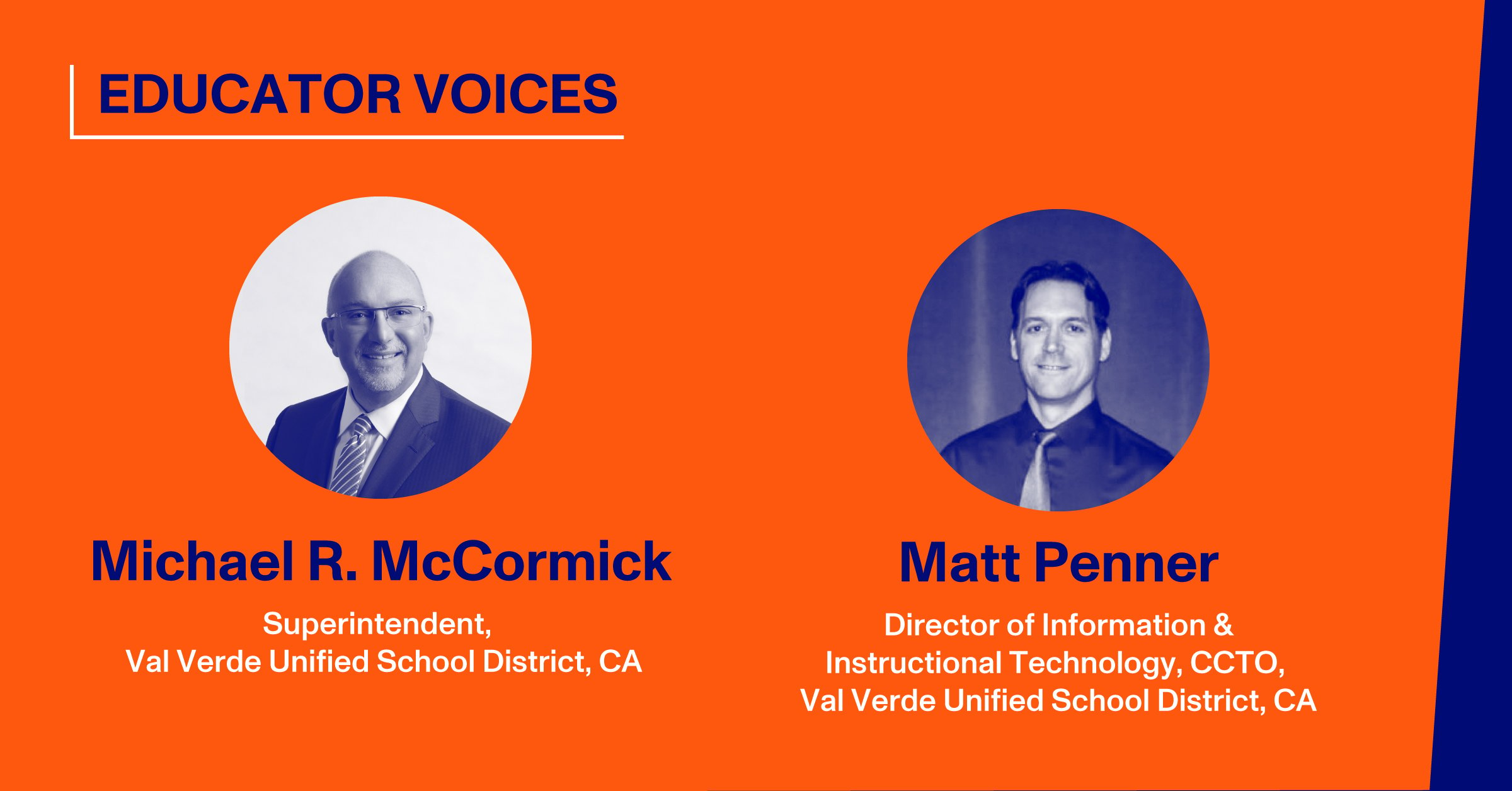 The two shared how their district aligns Technology and Education Services to make decisions together and move faster.

1. Move IT into the Ed Services department

2. Automate the mundane, create processes, and move on

3. Decentralize your IT infrastructure

This discussion has been edited for length and clarity.

1. Move IT into the Ed Services department

Early on in my role as assistant superintendent 12 years ago, we started having conversations around aligning Ed Services and IT.

There was some pushback because there was a lot of fear that if IT, which normally sat in the business services division, was moved over to the Ed Services division, there would be a lack of support on the business functions of the district, particularly with respect to Fiscal Services, Human Resources, etc.

I really wanted IT to focus on our number one reason for existence: students.

And it doesn't mean that we were trying to obfuscate our responsibility in supporting the business functions of the district, but I think we learned how to get a little leaner and meaner, and made the transition to move IT over to the Ed Services division.

We like to think of IT as not only Information Technology but also Instructional Technology.

This alignment put IT at the forefront of conversations around teaching and learning and how we could support our teachers and students.

I had tough conversations with people in the Business and Human Resources divisions at the time to say, "look, we think we can still support you. You've got to have a little trust in us."

It wasn't that I was trying to hijack IT as the Ed Services person all those years ago, but it was just a strong belief that we needed to get this technology into teachers' and students' hands.

2. Automate the mundane, create processes, and move on

It shouldn't take five phone calls to do something simple like unblock a website for a teacher or get security camera access to an assistant principal.

Let's write it down, let's work with the leaders who make the decisions and just set it in stone and move on. It should be as simple as creating a ticket and moving on.

We have a fairly robust ticketing system, Cherwell. To me, it's about accountability, quality of service, and a good way of tracking your commitments and your wish list.

Whether it's a teacher asking, "how do I use this tool online?" or my CTO saying, "we need to look at this new financial software," or HR asking, "what's a better way to onboard staff during COVID?", we've committed to make that work and look back and say: Where did we fall short? How do we make things a little more streamlined?

Our maintenance team, HR, and Ed Services have also adopted a ticketing system. When IT hands the baton off, the whole service and quality process is tracked from beginning to end. That might sound a little over-the-top, but it's through automation and processes that we could create a small group of experts who are passionate about making things work and expand what we're able to do.

If we solve it one day, let's not have to solve it ten times later.

Let's create the process, let's do it, let's all move on, and let's figure out the next challenge.

3. Decentralize your IT infrastructure

Decentralizing our IT infrastructure was vital. When we did that, it was this idea that we were going to push IT Services out to all 21 of our sites, and we were going to do that through the use of our technology integration specialists. We have at least one on each campus, and they're the on-the-spot, just-in-time helpers for our teachers.

The fastest way to kill the innovation spirit among teachers is to have them stop what they're doing and fill out a help ticket.

What I have observed in our schools is that it's often not a huge problem that prevents a teacher from trying to do something. It's usually a 30-second little thing, and if they can just get over that 30-second hump, then they're back in action and ready to go.

So we tried to create the spirit of innovation by decentralizing our IT structures to include more on-demand help when teachers need it.

They can run down the hall, check with a colleague, and get a hold of one of those technology integration specialists. It reinforces the spirit of: Those who are closest to the work should be getting the help they need to do the work.

For years we've had a teacher in the IT staff, which has been instrumental to create that liaison. I think in IT, we're really good at creating solutions, but we're not the ones using them to teach kids. We can help teachers log in to Google Classroom and show them how to do some amazing things, but we're not the ones who are having to translate that into instructional practices, and that's where a lot of our TOSAs come in.

I'll never forget the phone call with our previous IT director when I discovered Google for Education. He said: "I don't know Mike; we're a Microsoft shop. We use Active Directory, and that's how we've always done it."

It wasn't that he wasn't willing to investigate and try, but you can sense right away that there was a fear of change and "how are we going to be able to integrate Google and Microsoft?" and "what was that going to look like?" and "could we run two massive platforms like Microsoft and Google simultaneously?"

So it's about creating a culture of "yes" and a culture of "and." We can run Microsoft, and we can stick with Active Directory and SQL and all the power and benefits of that.

There used to be internal resistance within IT.

I remember when the iPad had just come out, we were giving them to our principals and assistant principals, and someone in our IT department said, "what's this for? It's not Windows; you can't run Office on it." And I said, "it's something new. Let's play with it and see what we can do with it."

For decades, in IT, we had been the sole arbitrator and dictator of what technology does.

You put a desktop in a classroom, a projector, and we have the magic apps that only we are allowed to install.

And suddenly, we're thrust into this age of iPads and instant apps.

I think some resistance in IT came because we couldn't keep up, and that was true.

And that's where that whole idea of de-centralizing IT comes from. But not just with your staff and your support but the devices too.

Let's set up a Google platform and turn on some neat tools like Google Docs and Sharing and let's give them to teachers and see what they come up with. We still have to support it to keep it running and safe, but let's get it out there.

With things like iPhones, apps, and cloud services, I think a lot of staff felt they had to circumvent IT to use some of this stuff.

My thought was: Let's play with some amazing tools and see if we can use them to make a difference in our classrooms.

One thing that has been a game-changer for us is that we really kept the spirit of: Motivate, not mandate.

When we first gave iPads to our teachers, we had no instructional expectations for them whatsoever.

People would ask me, "what am I supposed to do with this?" And I said, " take it home over the summer and become one with your iPad. Put your favorite music on there. Just explore and have fun with it."

I think that released a lot of anxiety, and we still have that same spirit today.

Many of our best ideas that we have scaled across the district have come from our innovative teachers working with tools that they've discovered in the classroom.

10-12 years ago, I would reinforce this "motivate, not mandate" when I would do classroom observations with the cabinet team. I would bring a little flip camera with me, and I would record videos of the things that I was excited about.

Then I would do a little editing on it and give it to the principal and say, "at your next staff meeting, show this back to your teachers."

All of a sudden, this generated all this excitement. Well, the days of flip cameras are gone, so we use social media to do that today. We're taking those very best practices and giving them a voice across the entire system.‌