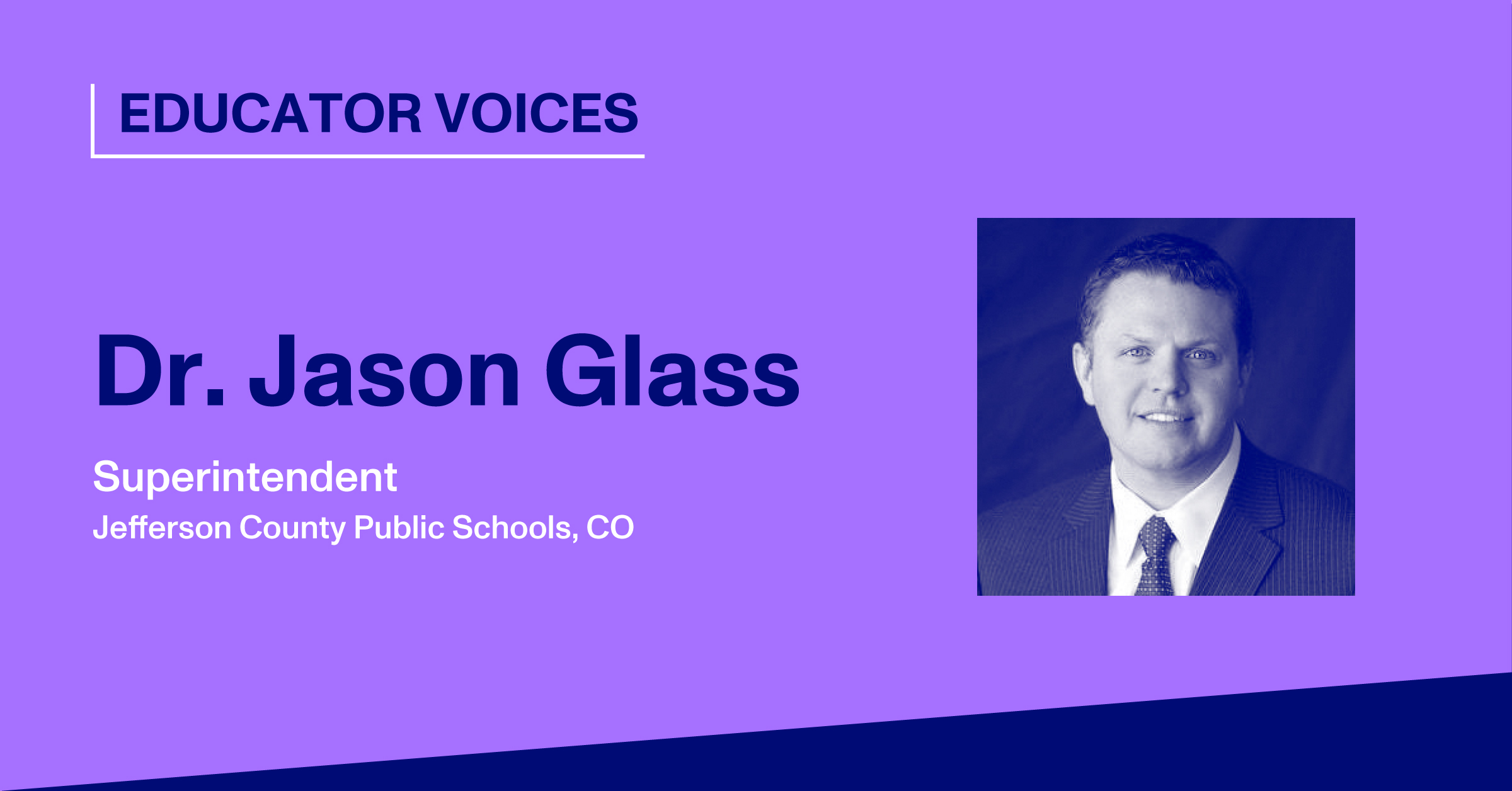 To Open or Not to Open & How? Superintendent Dr. Jason Glass on Finding the "Pragmatic Middle" for Next School Year

No one fully predicted the onset of pandemic learning, and as of now, no one can fully predict what the 2020-21 academic year is going to look like.

For districts around the country, the decisions surrounding the reopening of schools are going to involve untangling a web of complex, often conflicting, concerns.

For his team, it’s all about making decisions based on the “authorizing environment, and finding the pragmatic middle between the polarized worldviews of your constituents.” These polarizations are even more amplified during this time:

School closures have caused academic learning losses, equity issues, socio-emotional issues, and economic disruption for our community. There is a pressure to restart school due to these, but we also cannot ignore the threats of the global health crisis. So where’s the pragmatic middle here? That’s the work that we’re doing right now on the restart plan.

Schools across the country are facing a triple threat of challenges, layered atop one another—and the JeffCo restart plan for the fall will have to account for all three: “Getting school restarted, getting through budget challenges, and beginning a self-re-examination of anti-racism efforts in our system.”

To open, or not to open

“One of the big disadvantages we have in the U.S. system is an inability to do widespread testing when students and staff return to school—something that other systems were able to do when they reopened. That speaks to how unprepared we have been for this crisis. We are having to take all of this risk, in starting our schools, without the testing and personal protective equipment that many of the international systems have.”

“Superintendent school doesn’t prepare you for all this,” he joked, “there’s no course on infectious diseases, though there will be now.” Words like vector, symptomatic, mitigation have had to become part of the daily vocabulary of school leaders.

Dr. Glass has had to gain an expert understanding of the virus and how it spreads. He’s had to consume the medical analyses that are consistently coming out, and to look at what has or hasn’t worked for systems in other countries.

He described how he had a solid team in place to respond as effectively as possible in March, when school buildings had to shut down: “We had high levels of trust and talent, to make the transition to keeping the work going remotely. And that continues.”

When asked if the district would be conducting professional development over the summer, Dr. Glass said that as soon as this school year ended, he wanted all his staff to leave, unplug and take a break. He told them he needs them recharged because when they come back, he’s going to be asking a lot from them.

The district will be welcoming principals back in July, and teachers in August, at which point they will begin the training for the fall. This will involve everything from handwashing, social distancing, and hallway traffic protocols.

“We are testing the possibility of doing simulation training on some of our sites.”

On the instructional side, their team has learned a lot about the capabilities of remote learning technology in this period. For instance, appreciation has grown for asynchronous learning, which allows students to solve problems independently, lead their own learning, and pick their own projects.

We’ve seen the power of technology to instantly access content and connect with people in novel ways, that we wouldn’t have thought about if everyone was still sitting in the classroom the same way today. I also think we learned a lot about its limitations. It is not a replacement for in-person relations.

Like most districts, theirs is headed towards a likely hybridization of the remote and in-person models.

Dr. Glass noted that fortunately, closures occurred towards the end of the school year, when a lot of strong relationships were already built between instructors and students.

“Due to this, our student data was hovering at about 95 percent engagement overall.” Of course, in some of the more high-poverty sites, it was around 80 percent, in large part due to the economic disruption in those areas. “But this 95 % was possible because they already had those connections with their teachers. In the fall, it’s going to be tough if we don’t sustain and build those,” said the superintendent.

In June, JeffCo athletics and activities will be restored under a phased-in approach and set of health and safety protocols.

“We have to phase it in. It’s about restoring the experience to the greatest extent that we can while being really careful about how we do it.”

They will start out with limited team workouts, where the athletes will not come in close contact. And they’re phasing in the athletic training regimens, too: “We have athletes who haven’t been training for quite some time, so we want to set up ways to ease them back into the training.”

The hope is to get to a place where athletics, marching band, and other activities can be restored fully as the district moves towards symptom screening, temperature checks, PPE, and separated cohorts—all as a combination of virus mitigation steps.

The extracurricular aspects of school are some of the things that kids value the most, he said, evoking the work of Harvard professor Jal Mehta who differentiates between the core (pure academics) and the periphery (extracurriculars and electives) of schooling: Experiences in the periphery are often what students benefit from the most, because that’s where they build their most powerful relationships. It’s often also where they gain deeper, experiential learning experiences.

“We need to work to restore the periphery,” said Dr. Glass, “we need to be careful, but It’s a priority.”

It is challenging to think about next year’s plan, which will no doubt be more complicated and expensive than previous school years’ because the budget is restricted.

“We’ve got big budget disruptions that we’re trying to manage, and the federal CARES Act money has offset that to some degree,” he said, but they are still expecting a difficult road ahead in terms of operating next year. “And the long term multi-year budget impacts will be even worse. So we’re trying to conserve as much as we can to shield ourselves from those down the line.”

Dr. Glass credited the leadership teams that came before him in managing the district responsibly and building up a significant cash reserve that will certainly help the situation. He hopes that the JeffCo team comes out of this having examined which aspects of their system are critical and not, and ultimately emerge as a more efficient system.

“There are long overdue conversations around race and equity in our nation as a result of the current civil unrest. What can we do as an educational institution to confront that within ourselves, and examine and make changes to our own practices and systems?”

“We need to think about how to do that work thoughtfully. And when my kids and my staff get back, how can we enter these conversations in a way that doesn’t create reactionary sentiments and movements that make it harder to enact effective change?” he asked, pointing back to the “politically purple” nature of his community. “We have to approach this differently than Denver or Boulder would.”

While it’s a shame that it took such a culminating moment to drive this moment, Dr. Glass contends that we cannot let this moment go to waste.

For example, they are looking at their special education and gifted and talented education identification disproportionalities—according to the statistics, Black and Brown students are more likely to be placed into the former, rather than the later. They are also disproportionately represented in the rates of harsh disciplinary action taken on students.

Do we really believe that our Black and Brown kids are less gifted and talented? Of course, no one would say that out loud, but the results show that that is the outcome in the system that we’ve created. That in itself shows us that there are difficult conversations that we need to have and that every school system in the country has to have.

Again, Dr. Glass pointed to how JeffCo has for decades invested in leaders and people that are talented:

“When I pull a team together, saying we need answers on how we’re training people around systemic racism and oppression, how we need answers on how we are going to evaluate our own practices and policies, and how we are going to have tough conversations with our law enforcement partners, within a day, they had pulled together a ton of resources and had a starting point for us to go off of. So the skills and willingness to take on tough, necessary tasks here is extraordinary.”

So, as they try to rest up during what’s left of summer, Dr. Glass and his team have a triple threat of challenges to look forward to tackling. Incidentally, this list of three was also Dr. Glass’ answer to the question of what excites him about the future of his community: Managing school restart, managing budget restrictions, and managing anti-racist systemic changes.

“All three challenges in some way present opportunities.”

All of us are temporary in the positions of power that we hold, he explained. “There’s a fuse burning on how much time you have, from the moment you step into your role, and I believe that we’re charged with doing all the good while we can.”