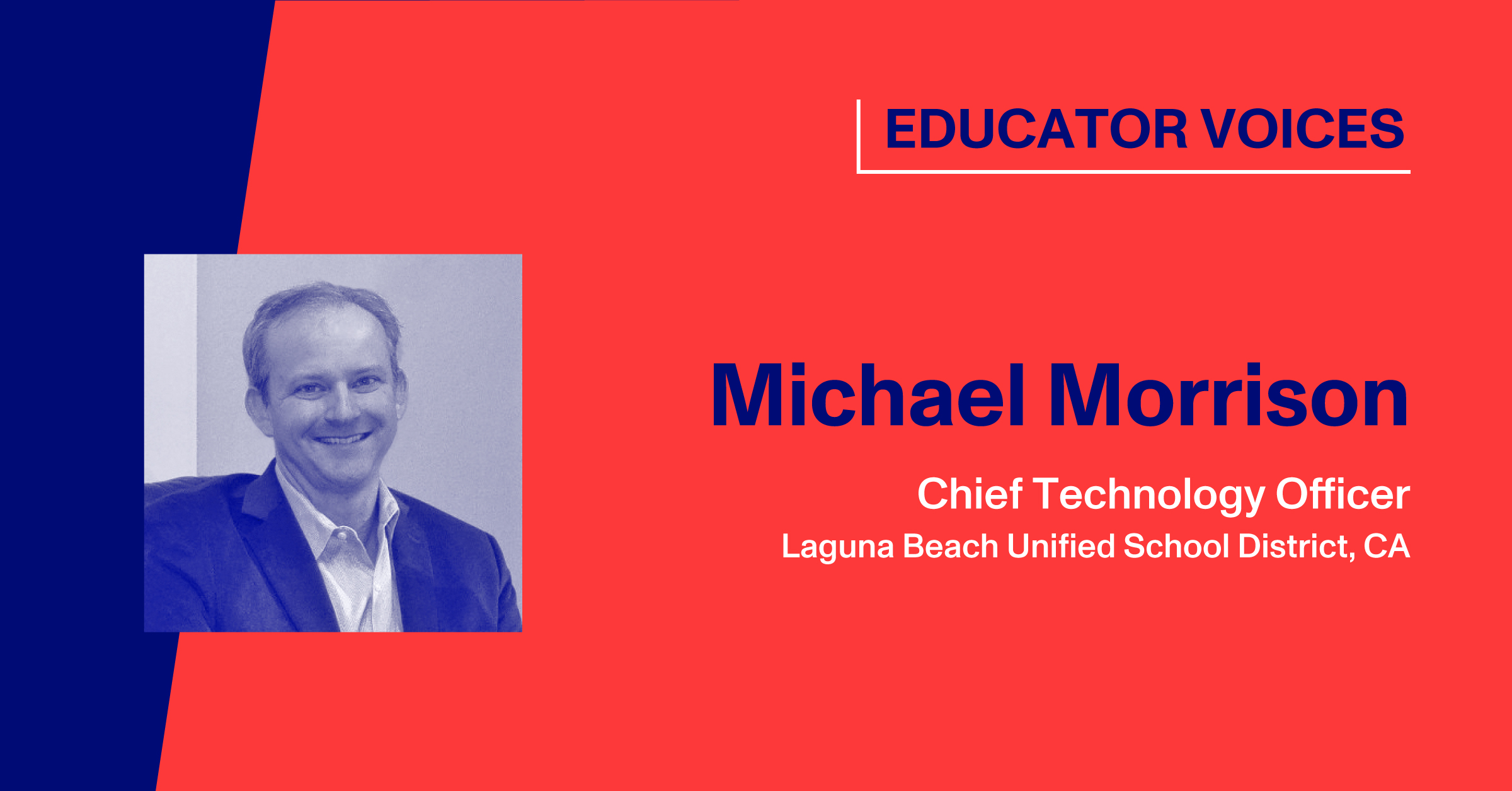 It's Business as Usual at Laguna Beach USD—Here's How

Michael Morrison from Laguna Beach Unified School District (LBUSD) generously agreed to share his insights about how his district is successfully handling school closures with remote teaching and learning.

Given these unprecedented times, our CEO, Phil Cutler, began reaching out to Paper’s partner districts to check in on how they are coping with the pandemic. One of the first messages went out to Michael Morrison, Chief Technology Officer at LBUSD, the first district to ever adopt Paper across their entire middle and high school population.

When Michael signed the experimental partnership in 2018, he told The LA Times: “Many of our students can afford a tutor, but some can not. [Paper] has the potential to close that gap by allowing all students to get help anytime they need it,” adding that students being able to access interactive learning experiences 24/7 with Paper has a “tremendous potential to change our culture."

Fast forwarding to 2020, as Phil checked in with Michael about how LBUSD was coping with closures, our CEO had two things to share with us from that call: First, that LBUSD would be expanding access to Paper’s platform down to their elementary level students. Second, that all things considered, LBUSD was pretty much “business as usual.”

Stunned by Michael's statement, the Paper team to ask him to share with us how his district of 3000 students was prepared enough to now be functioning steadily despite the disruption and distress caused by the COVID-19 pandemic.

How Laguna Beach USD was prepared for closure

Michael mentioned a few ways in which his district was set up for success in the move to distance learning:

“There are things that we were really ready for. We’re 1:1. We checked out iPads to Kindergarten students. Our K-4 is in-house 1:1, and 5-12 is check-out. So we had parents come in and check out for K-4. We opened up the district office and we had a drive-through. Parents would come in and we’d give them their device and they would be on their way.”

Moreover, the drive-through organized by LBUSD was able to provide filtered hotspots for those families that required internet connectivity at home. Michael also gave credit to his district’s “really good social-emotional support team,” that was able to identify students who seemed to have a disconnect with distance learning:

“We have a list of those kids and our social-emotional support team is reaching out to each one individually, setting up sessions and talking to them. So I feel like that’s one thing that we did well. Even though this is going to be a tough time for everyone, at least we have people reaching out saying ‘Hey, what’s going on? How are you doing? Let’s talk about some things.’"

Still, he identified the “synchronous learning” element of online instruction as a challenge. He explained that while 70-80% of the district’s teachers were incorporating technology in classes, it was not as much for student interactions as it was for posting materials or assignments, i.e. asynchronous learning. So, a lot of the district’s planning and training has gone towards setting up good systems for synchronous learning. “We developed a calendar for online training. Every day we have 10 classes of training that are for teachers, that they can drop into. And then we record those sessions and they could come back,” explained Michael.

How is Paper helping?

While Michael described LBUSD as being prepared for some things in the move to remote learning, he informed us that there are still concerns that not all students will be able to succeed in a remote learning environment:

We did some research into why kids fail in online classes, and there were some things that stuck out to me, and we are trying to address them. One of them was that students fall behind and they get lost. That’s one thing Paper addresses. Another reason is some kids aren’t quite sure how to get online help. So that plays into Paper as well.

Districts partnered with Paper give students the opportunity to access 24/7 online academic support, preventing them from falling behind. Students receive unlimited one-on-one help, on any subject, from a Paper educator who guides them in their learning.

The intrigue of Paper

Michael was one of the first people to really recognize the value of Paper (then GradeSlam) and brought it to his district over two years ago.

What intrigued Michael about Paper when he first heard about the Educational Support System (ESS) was the 24/7 support that all students can access:

Our district is in a pretty wealthy area, but there are some students that don’t have the ability to get a tutor and I always felt like this was an unfair advantage. A lot of our kids can easily afford a tutor, but some kids have no way of affording that. So we thought that Paper would even the playing field for them and give everybody a tutor and help.

As a tech entrepreneur himself, Michael was impressed with Paper’s platform: "The other reason I decided to go with Paper is my team and I were watching the demo and at the end of it we looked at each other and we all said ‘why didn’t we think of that?’. [...] So my thought was ‘hey, we should give this a try and see how it works’"

Michael enjoys working with companies that have the customer and the students in mind, and that are open and responsive to thoughts, ideas and improvements. One thing that was apparent to Michael right away was Paper’s willingness to improve and ability to take feedback on board: “I just think that they’re open and have the right philosophy. They focus on equity and on students and not on money.”

Michael also appreciates Paper’s quick turn-around time with any request, most notably his request to expand access to Paper to the elementary schools during closure:

Within three days, all our elementary students had Paper. It’s that kind of attitude and collegial spirit that makes us love working with people like you ... We had two teacher training sessions from your team. And that was the other thing, we said: "Hey, next week can we get some help with training?" And we had someone training next week! Which you know, that’s hard to do with some companies that are less responsive.

Michael thinks that the “silver lining to the corona cloud” is that teachers will emerge from this feeling very familiar with tools that they hadn’t ever used before. He mentioned that the training sessions at his district are “incredibly intensive,” and teachers are emerging from them feeling confident in their ability to cope.

However, he knows the in-person component that is missing right now is an integral one. When schools reopen he hopes we will find a good balance between virtual and in-person instruction. Ultimately, he says, “I think it’s going to end up being a positive.”

Lastly, Michael mentioned how the crisis pushed the district to address certain gaps in resources. Specifically, it has brought attention to how internet connectivity significantly contributes to academic success. This is true not just during the pandemic, but overall. “We’re going to leave those hotspots with the families,” he said.

Most districts are no doubt struggling, given that a majority of them are having to be reactive rather than proactive right now. Still, as districts respond and adapt to the challenge, there are important lessons to be learned that will be relevant long after the pandemic.