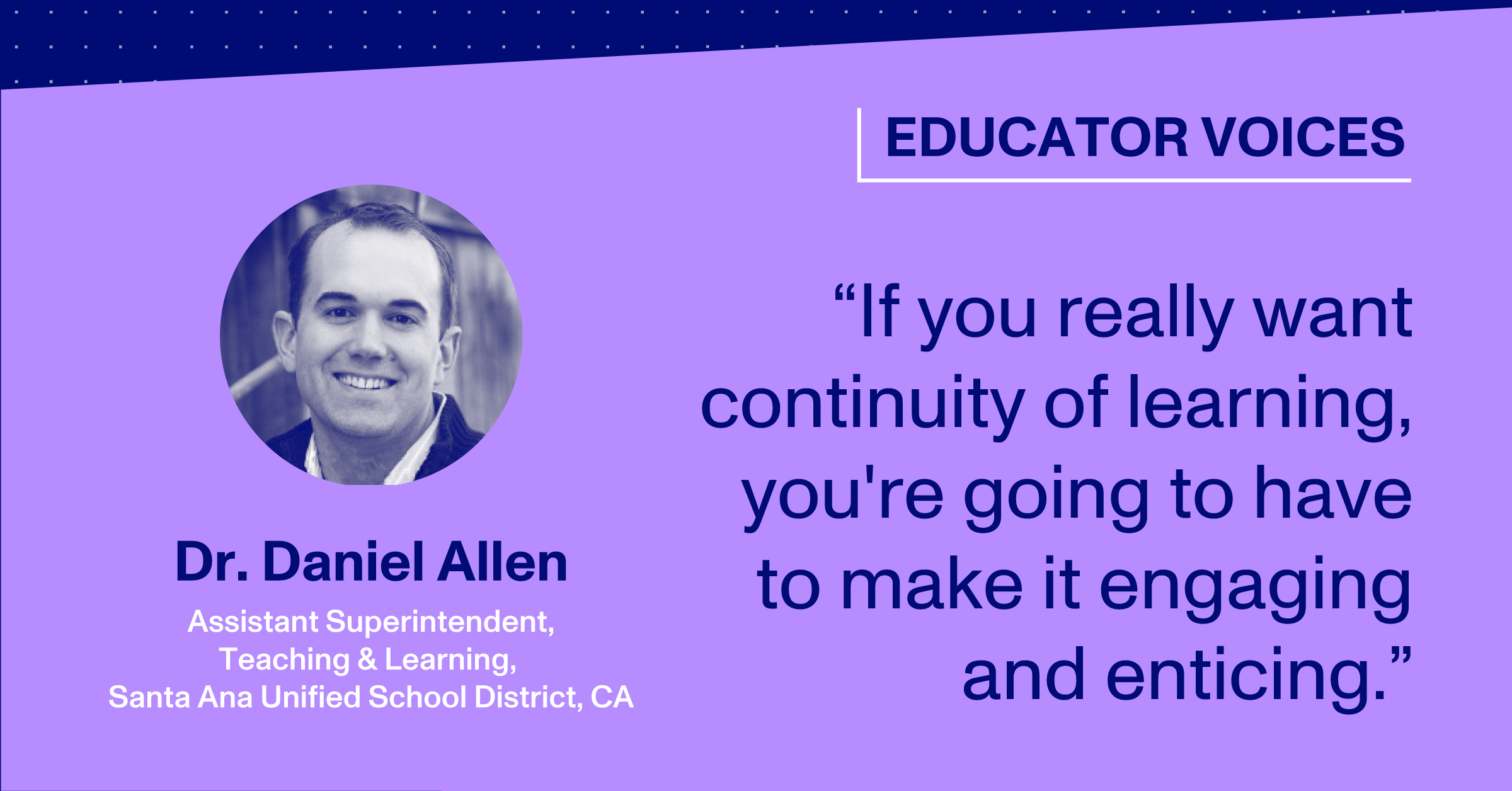 Dr. Daniel Allen has a history of educational leadership in innovative and progressive schools. He taught high school Spanish for a number of years before doing graduate work in school leadership at Harvard. There, he developed an interest in education reform, and consequently took a principal job at a progressive charter school organization in the San Francisco Bay area.

Afterwards, he obtained his doctoral program in educational leadership and equity at Berkeley, and was recruited to Santa Ana Unified School District (SAUSD), the 10th largest district in California, with a sizable population of English Learners and economically disadvantaged students. The superintendent and deputy superintendent at the time were both passionate innovators in education and had big plans for the large urban district. They wanted to transform and rebrand the district, and gave Daniel a “blank slate” to do so.

At SAUSD, Daniel led a team that won the XQ: The Super School grant, and built an International Baccalaureate School, Arts Conservatory, and the district's first competency-based charter school. These efforts in district innovation led him to his current role as assistant superintendent of teaching and learning. “It's been great trying to figure out how to take innovation to-scale in a large urban school district like Santa Ana,” he stated. “It's also been really rewarding to work in a district that is so focused on access and equity.”

In a few months, Daniel will be moving to a superintendent position in San Jose, Costa Rica. While he didn’t expect his last months at SAUSD to be consumed by COVID-19 response planning, they have certainly left him with a lot to reflect on.

Nuances of the digital divide at SAUSD

About five years ago, SAUSD only had about 8,000 devices for a district of 50,000 students. To address the digital divide, the district started an “access for all” initiative where they heavily invested in their digital infrastructure and adopted a 1:1 Chromebook program. As the district’s new focus on access to technology rolled forward, they started to realize that the real challenge was internet access at home for students.

“We've had this pandemic and the school closures and it’s really highlighted the nuances of the digital divide,” said Daniel. Though many of SAUSD’s families have internet access to some extent, Daniel explained that many of them are under-connected. On top of that, the city of Santa Ana has broadband issues where parts of the city aren’t serviced by broadband or have slower speeds.

“And so we have kids saying, ‘I have no internet,’ kids saying ‘I have internet but it's so slow that it just frustrates me,’ and kids who can't access the type of learning that some of the other students can,” he said. Daniel and his district are trying to pivot quickly to provide better access, but they think that the long-term solutions are to partner with broader county and local agencies to provide across the board coverage for all their families.

When we spoke to Daniel, he wasn’t yet sure what SAUSD was doing in terms of students’ grades for the rest of the school year, but he was certain there would be a “do no harm policy.” This means that students can’t do worse than they were doing before the pandemic and they can’t be penalized for lack of connectivity.

Moving away from traditional assessment methods has opened up other questions as well. Daniel explained that without the incentive provided by grades, there are concerns that students’ interest in school work might decrease. He then added that it has always been a challenge to motivate students to learn for the sake of learning, rather than for the pursuit of grades: “We’re just now forced to actually address it.” He said that educators have an opportunity to rethink their approaches to teaching and learning: “If you really want continuity of learning, you're going to have to make it engaging and enticing.

Daniel thinks that the school closures have “cracked open” teaching and learning in the sense that they have made “every single practice, system and assumption” in his district open to renegotiation. This includes students’ daily schedules, assigned workload, how the district supports social-emotional health, and how teachers engage and communicate with students.

Incidentally, Daniel had written about one of the changes in SAUSD’s practices on his blog, #schoolmadefresh. In a recent post describing “teachers as curators”, he explained that with physical schools closed, every teacher has become a designer of their online learning environment: “Rather than relying on direct instruction, the teacher is engaged in a process of selecting programs, interactions, and experiences designed to support the learning of students.”

Expanding on this post, Daniel said that though some of the more direct (i.e. synchronous) parts of instruction are slightly “clunky” online, the asynchronous parts of distance learning that have to do with the curation of instructional materials are currently a strong point. “I think that our teachers are going to be better about the curation piece. I think they're going to be better about opening up the world to their students and encouraging their students to kind of navigate through that space,” he stated.

Daniel pointed out that, for years now, there have been a “core set of reformers pushing on education” and criticizing the system for not evolving or leveraging technology enough. While one outcome could be the general public accepting digital learning as the “new normal,” Daniel thinks another possibility is that people will become averse to it.

“Parents are having a very visceral experience of trying to figure out what virtual education looks like for their kids and I think the jury is very much out on whether or not they're liking what they experience right now,” he explained. However, he highlighted that parents are experiencing this while also potentially dealing with a lot of stress and uncertainty in their lives: “There's kind of this association with virtual learning and disappointment and difficulty. So, it'll be really interesting to see how this spirals out as we move forward.”

The flip side of that, said Daniel, is that all of his teachers have been pushed to do distance learning and develop their digital skill sets and practices. While this can consequently increase the capacity of educators to provide virtual instruction, he wonders if the demand for it will go down due to families’ negative experiences during COVID-19.