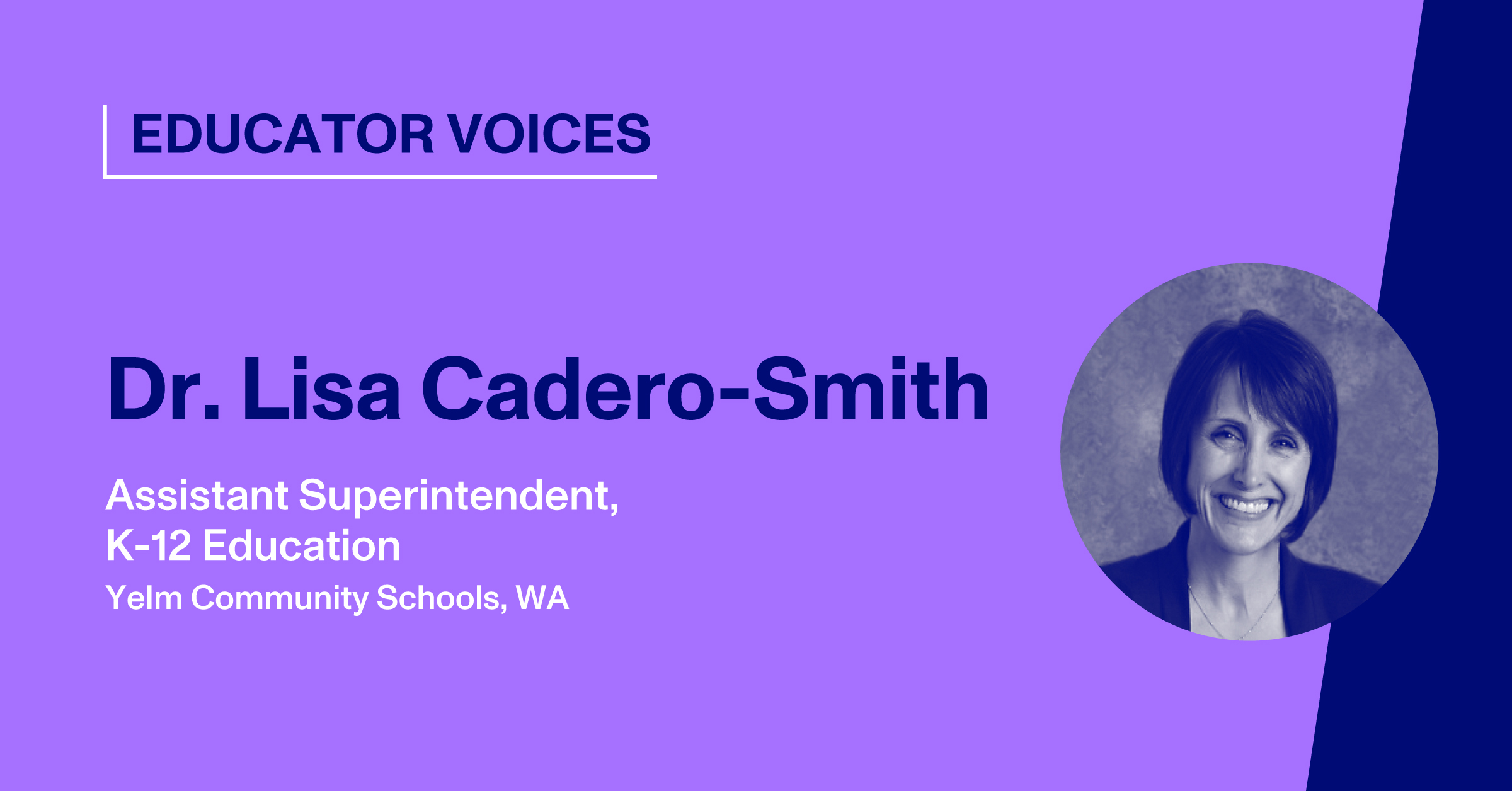 About halfway through our conversation with Dr. Lisa Cadero-Smith, the Assistant Superintendent at Yelm Community Schools, where we discussed how the district was adapting to distance learning, she paused to share a story with the Paper team.

Earlier that week, Dr. Cadero-Smith received a phone call from a mother in her district who needed her help. The mother and her husband are healthcare professionals with three children. One in high school, one in middle school, and their youngest was in first grade.

The mother explained to Dr. Cadero-Smith that she and her husband are required to work four back-to-back 12-hour shifts because it’s all hands on deck in the health care sector. And whatever little time this couple has at home, they end up spending it trying to learn chemistry and algebra to help their two eldest children. Meanwhile, the first-grader can’t do anything on their own. If the youngest is going to receive any instruction, they need to have someone to supervise until the lesson is complete. Even though the overextended mother described her kids as good students, the fact of the matter is they were struggling to keep up with the pace that was initially set.

After hearing this story, Dr. Cadero-Smith went back to the principals and asked them to work together to pair it down. The story above is just one example of what families are facing during this crisis. Though the details may change from family to family, the story’s moral applies to all families. Everyone has a version of current events being too much. So, by connecting with teachers and making sure that everyone was aligned, they were able to determine the most essential learning goals for each course and build the coursework from there.

Following the example of the mother working in health care, Dr. Cadero-Smith broke down Yelm’s hierarchy of priorities as:

It’s hard for us to truly describe how jarring it is to hear a public education official put education at the bottom of their list. And we should note that it places third on the list not because it’s lost any importance. It’s still a priority, but how much information can you expect someone to retain if they don’t feel safe? Connectivity, meanwhile, proves to be a much more complicated need to meet. Though coordinating teachers to be mindful of the different stressors we’re all experiencing and being mindful of overloading students and their families is a great place to start, the fact of the matter is understanding what each family is dealing with is relative to their ability to connect with teachers and administrators.

Once Yelm Community schools were officially closed, Dr. Cadero-Smith and the entire Yelm team went to work to enact the district’s distance learning plan. It began with making sure the schools were properly disinfected and deep cleaned, in case the stay-at-home order was lifted. After that, Yelm teachers began preparations for parent-teacher conferences. As Dr. Cadero-Smith explained, there was a two-fold reason to conduct these conferences, “One was to know how our families were doing. Who needed food, who had an internet connection, what other services did people need? But then also, we needed to assess how we were going to build our learning plan going forward.”

Initially, when there was still a chance things would reopen in March, the plan was focused on maintaining learning. When it became clear that this would last much longer, Yelm had to act quickly to put together a new plan, one that accommodates continuous learning and forward movement. Dr. Cadero-Smith recalled the change in direction by saying:

“It’s the difference between, sending worksheets, activities, and packets. Posting things out that we already have versus we’ve now got to build a plan moving forward in a highly variable environment we’ve never encountered before."

There are families with very, very different resources and less connectivity, so we can’t expect the same volume of content. It’s just not realistic. We don’t have the same touch. School would be considered a high-touch model and now we’re moving into a variable-touch model. When we can establish internet connectivity with a kid, that’s fairly high-touch. But the kids that go all the way down to packets, that’s really low-touch.

The Yelm Community Schools team was able to get a massive number of Chromebooks out to their kids to ensure the majority could have some way of connecting with their teachers. However, the team is also acutely aware that with 40 percent of their community hovering around the poverty line, there is an equity issue present.

That awareness of the equity issue is how Yelm Community Schools came to be partnered with Paper in the first place. As Dr. Cadero-Smith explained, the partnership was motivated by Yelm’s desire to address the equity issue they saw affecting their students.

“We partnered with Paper because we wanted to bridge the gap among our students. We saw Paper as an opportunity to provide 1-on-1, content-specific tutoring for students that would provide a level of access and support that we couldn’t provide any other way. It was very much, for us, about equity."

Paper’s a solution to a problem we’re trying to overcome, which is that students have a disparity of opportunity and access. This is a tool that helps level the playing field for students.

Dr. Cadero-Smith went on to say that the timing of Yelm’s partnership with Paper couldn’t have been better. Just days before the stay-at-home orders were issued, the Paper team had completed an on-site student orientation. Had it not been for Paper’s commitment to quick turnarounds and customer success, we would have had to conduct Yelm’s orientations remotely, which, at the time, was something new. Dr. Cadero-Smith was grateful that Yelm students would be able to access tools like Paper, Chromebooks, Google Classroom, and others that help create a high-touch model from home.

“Just roughly speaking a little under half of the families in our community don’t have enough of what they need. One thing that was fortunate right out of the gate was that most families have connectivity. That was our first big frontier. The vast majority of our families had connectivity, it was a really small number at each school that didn’t have internet. That helped because it told us we can largely deliver instruction through an online format, so that we could connect through tools like Google Classroom, Zoom, Paper. We were going to have the ability to use digital tools, which are so much stronger."

The majority of our kids could really benefit from the digital environment. With the next, smaller group, we had to say, ‘If you don’t have internet, does your parent or guardian have it at work? Can we get a hold of you via phone? Is there a way to use a hotspot on a phone to connect a Chromebook? How do we engage you over the phone? Maybe we email you something and, at 2 o’clock tomorrow, the teacher calls and talks you through it. The families needing the paper packets are likely to be the families who are struggling the most. The most disconnected because if they could afford internet, for the most part, they would have it.”

Printed packets of coursework, in Dr. Cadero-Smith’s professional opinion, should be considered a last resort since they offer minimal support from teachers or tutors and are typically the slowest way of getting feedback to students. In some cases, it is the only option.

When the crisis ends, we’ll have to reevaluate not only educational equity but connectivity equity since now more than ever they are inextricably linked. The Yelm team is working hard to figure out and individualize solutions for students and families. One-size-fits-all-solutions only work for one-size-fits-all-problems. The issues we are facing require a tailored approach based on the unique needs of our community.

Finding individualized solutions for a family’s connectivity issues may seem on the surface a new problem, but this is the kind of unseen work educators do on a daily basis. It’s just a topical version of an existing problem. And that spirit is precisely why Dr. Cadero-Smith and Yelm Community Schools’ response to school closures was deployed to great success:

We kept pushing to think about what we have and already know. How do we translate that to a new delivery model? In other words, this isn’t ‘scrap everything and start over.’ We know a lot of things, we know our curriculum, we know our students. But how does that transfer to this new world?

Paper partners with K-12 schools throughout the U.S. and Canada to give every student an equal opportunity to excel academically. Our educational support system (ESS) provides learners with unlimited 24/7 homework help, writing feedback, and study support at a predictable fixed cost. Paper’s specialized tutors deliver on-demand, 1:1 academic support in four languages across more than 200 academic subject areas—so students always have access to expert extra help exactly when, where, and how they need it.